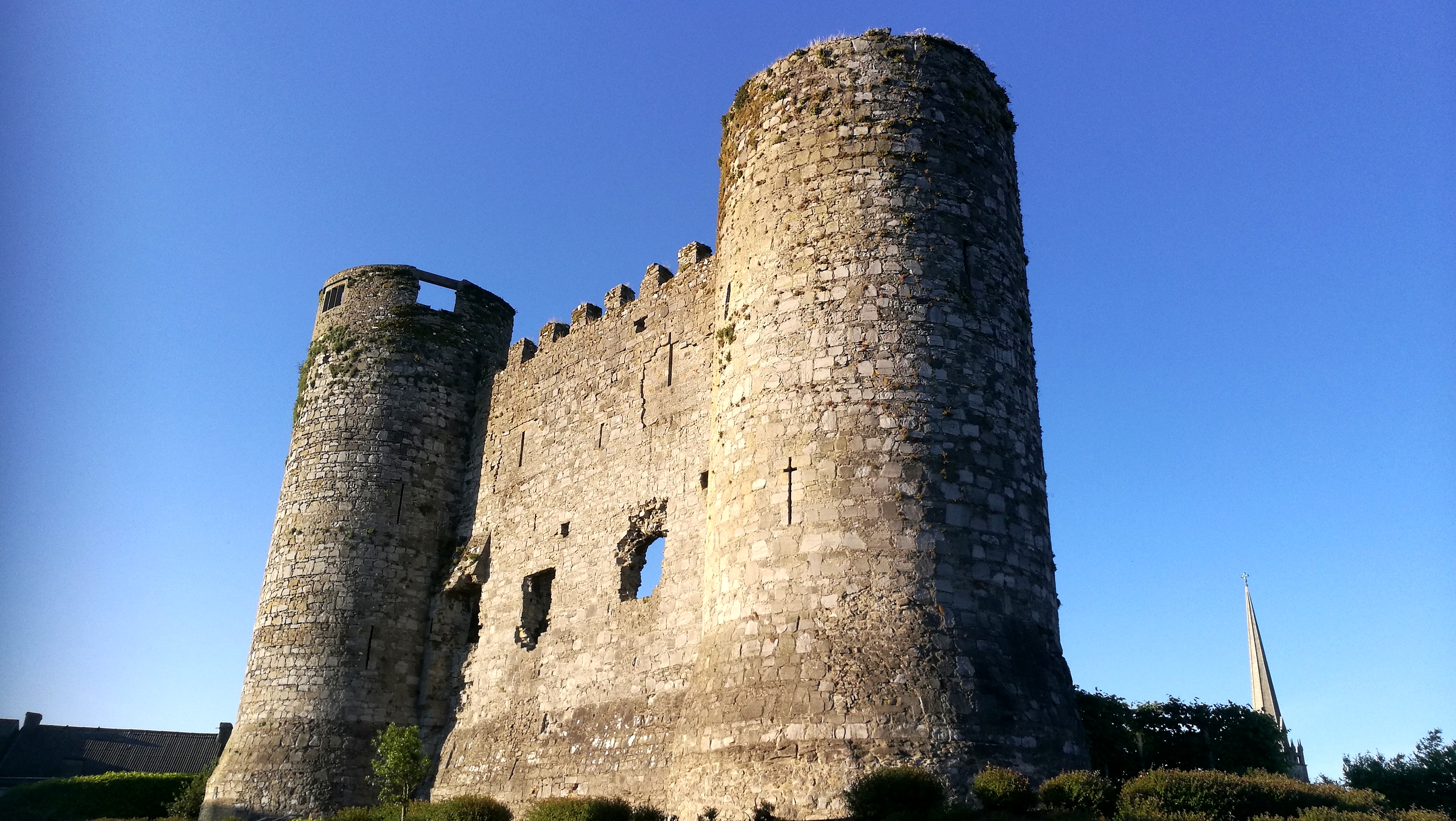 Carlow stone castle was not the first Anglo-Norman castle on the  site of the remains of Carlow Castle.

Shortly after the arrival of the Anglo-Normans to Ireland in 1169, the lands of Carlow were granted to the Norman Knight, John de Clahull.  Hugh de Lacy as ‘Keeper of Ireland’, built an earthwork timber castle circa 1180AD for John de Clahull.  Evidence of this was found during archaeological excavations in 1996.

The carefully chosen site, on a hill at the confluence of the Barrow and the Burren rivers, created a natural defence along the south and west.  Along the east, a bog and marshland area, known as the Moneen, separated the castle from the town.   The castle also protected the river crossing and the town of Carlow.  The castle was surrounded on three sides by water while an area of marshland restricted access from the fourth side.   The castle in the 13th century was essentially built on a rock island (hence the name Cath-er-loch, meaning stone/rock on the lake in ancient Gaelic language) – See ‘About County Carlow’ on this website for more information on the name Carlow ( Cath-er-loch).

Carlow stone castle was built in the early 13th Century by William Marshal who succeeded Strongbow (the Norman conqueror of Leinster) as Lord of Leinster.  William Marshal apparently commenced building the stone castle on the site in 1205 and it was completed circa 1209.  William Marshal had established a town at Carlow about this time and hoped to use the river Barrow to provide a trade route with the prospering town down river at New Ross.  At the beginning of the 14th century, the castle came under direct control of the English crown.  In 1361, the Exchequer and the Court of Common Pleas were moved from Dublin to Carlow town, making Carlow the administration Capital of Ireland from 1361-1363 and from 1364-1394 when the Exchequer was located at Carlow Castle.  The castle and defences were significantly upgraded and it is said that £500 was spent walling the town.

The stone castle was a rectangular block containing the castle’s principal rooms, protected by round towers at its four corners.  The design is rare among castles in Ireland.  It may have been copied from western France which was an area also under Norman control.  The walls were 2.7 metres thick and the excavation revealed that the castle has no foundations.  The original building was two storeys high with a third added later.

Carlow Castle originally consisted of a regular keep with circular towers at each of the four corners. Today, only the western half of the castle survives, the eastern side was destroyed in 1814. Also destroyed was the nearby hall, mentioned in early documents, as well as any of the stone or wooden outer walls that would have provided additional defences for the castle.

In 1814AD Dr. Middleton leased the castle and, in an attempt to convert parts of it for use as a lunatic asylum, he accidently blew up a substantial part of the castle, leaving only the west wall and its adjoining two towers.

The entrance can still be seen on the north side, where there is a doorway at the first floor level, originally accessed by a wooden stairs. Only the outer face of the west wall survives, but the remains of the stairs, providing access to the different levels, can still be traced in the rough inner face of the wall. Originally, the roof was contained within the castle walls and only covered the first floor. At a later date, perhaps when the castle became the seat of government in the 14th century, the roof was raised to the top of the castle walls in order to create a second floor. At the beginning of the 17th century, a building was attached to the north side of the castle but appears to have been destroyed sometime before the end of the 18th century. It survives only in a sketch by Thomas Dineley circa 1680.

The castle area was excavated for the first time in 1996 by a team of archaeologists under the direction of Dr. Kieran O’ Conor from the Office of Public Works. In the 1997 Autumn Journal of “Archaeology Ireland”, Dr. O’ Conor published a summary of his findings. During an interview in 1996, Dr. O’Conor stated that Carlow Castle “is one of the most important in the evolution of castles in either Ireland, England or France, there is nothing to match the architectural style of Carlow Castle to be found anywhere until at least 20 years after its completion.”